The Sevens (7) of the Bible in Time and Nature 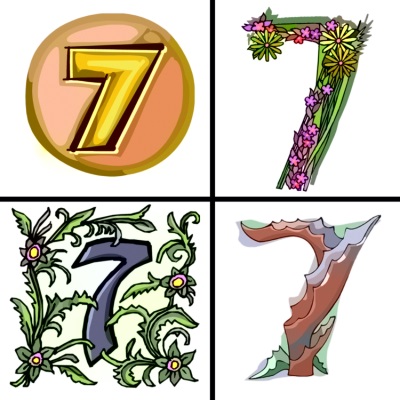 Why did the Lord God take seven days to make the present world, when surely an omnipotent God could have done so instantly, with a single word (the answer is so simple that it may astound you)? The Scriptures say that there are seven Spirits of God (Rev. 3:1, 4:5, and 5:6). There are numerous places throughout the Scriptures where God denotes things in "sevens" or multiples of seven. The Bible also shows us that God uses "sevens" throughout the Scriptures to denote prophetic time. Examples:

"Behold, there come seven years of great plenty throughout all the land of Egypt:" (Genesis 41:29 KJV)

"And there shall arise after them seven years of famine; and all the plenty shall be forgotten in the land of Egypt; and the famine shall consume the land;" (Genesis 41:30 KJV)

"And they that dwell in the cities of Israel shall go forth, and shall set on fire and burn the weapons, both the shields and the bucklers, the bows and the arrows, and the handstaves, and the spears, and they shall burn them with fire seven years:" (Ezekiel 39:9 KJV)

"Seventy weeks are determined upon thy people and upon thy holy city, to finish the transgression, and to make an end of sins, and to make reconciliation for iniquity, and to bring in everlasting righteousness, and to seal up the vision and prophecy, and to anoint the most Holy." (Daniel 9:24 KJV)

The very first use of "sevens" to denote time is found in Genesis chapters one and two. That very first group of seven days has delineated the days of the week since the beginning of human history. Man certainly has messed with the years and the calendars (so no man today can know EXACTLY what year it really is), but that seven-day week system has survived from Adam until today. No wonder - it was ordained by God from the beginning of this world. The 7th Day was proclaimed as something VERY special from the very first two chapters of the Biblical account. Let us look closer at the importance of the Seventh Day in relation to time:

"For [in] six days the LORD made heaven and earth, the sea, and all that in them [is], and rested the seventh day: wherefore the LORD blessed the sabbath day, and hallowed it." (Exodus 20:11 KJV)

It [is] a sign between me and the children of Israel for ever: for [in] six days the LORD made heaven and earth, and on the seventh day he rested, and was refreshed."
(Exodus 31:17 KJV)

"Six days shall work be done, but on the seventh day there shall be to you an holy day, a sabbath of rest to the LORD: whosoever doeth work therein shall be put to death." (Exodus 35:2 KJV)

The seventh day is the Sabbath day. On our calendar it is Saturday. On the Biblical calendar it is sunset on Friday until sunset on Saturday, local time. With the context of the above verses in mind, look at the following verses:

"And I saw thrones, and they sat upon them, and judgment was given unto them: and [I saw] the souls of them that were beheaded for the witness of Jesus, and for the word of God, and which had not worshipped the beast, neither his image, neither had received [his] mark upon their foreheads, or in their hands; and they lived and reigned with Christ a thousand years." (Revelation 20:4 KJV)

The latter verse speaks of a time yet future when the Lord Jesus Christ will reign on a regenerated Earth (Isaiah 65:17, Matthew 19:28), with man, for a period of 1,000 years (Revelation 20) before the final judgment, the final destruction of Satan and Death, and the beginning of eternity future (Revelation 21). What these verses tell us is that the seven 24-hour days of Genesis are a prophetic "type" which, when multiplied by one-thousand, gives us the length of time of the Biblical history of man from Adam until the end of time as we know it. In other words, 7,000 years is the length of all human history (but not all natural history).  The past part of that human history (since Adam) to the present is roughly 6,000 years according to the Biblical chronology. That means there are yet another 1,000 years ahead, which equates to a 1,000-year "Sabbath" of rest (day 7, see Hebrews 4:9) when the Lord Jesus Christ will return, reign, and rest from His redemptive work on the Earth as the King of Kings and Lord of Lords:

"Blessed and holy [is] he that hath part in the first resurrection: on such the second death hath no power, but they shall be priests of God and of Christ, and shall reign with him a thousand years." (Revelation 20:6 KJV)

"And when the thousand years are expired, Satan shall be loosed out of his prison," (Revelation 20:7 KJV)

"And cast him into the bottomless pit, and shut him up, and set a seal upon him, that he should deceive the nations no more, till the thousand years should be fulfilled: and after that he must be loosed a little season." (Revelation 20:3 KJV)

"Jesus answered, My kingdom is not of this world: if my kingdom were of this world, then would my servants fight, that I should not be delivered to the Jews: but now is my kingdom not from hence." (John 18:36 KJV)

Following that glorious "7th Day" 1,000 years of time, the day which follows will be a new first day, a new eternal beginning without end; like the next octave up the musical scale (more on that in a moment), so to speak:

"And I saw a new heaven and a new earth: for the first heaven and the first earth were passed away; and there was no more sea." (Revelation 21:1 KJV)

"And he that sat upon the throne said, Behold, I make all things new. And he said unto me, Write: for these words are true and faithful." (Revelation 21:5 KJV)

It has been about 2,000 years (prophetic days 5 and 6) since the Lord first came to save us from the power of sin and death. That means that his return is VERY close. Keep in mind that although our modern calendar is already past the year 2,000, it has not really been a full 2,000 years since the first coming of the Lord Jesus Christ and His death and resurrection about 32 AD. There are also events in the book of Daniel that must yet take place concerning the Jewish people before the "Day of The Lord" occurs (see: 1 Thessalonians 5:2). But although we can't set an exact date, we can be sure that the seventh prophetic day will dawn upon this sin-cursed world. Is this a faithful prediction? Certainly, because observance of the seventh day Sabbath was a part of the "Ten Commandments", a part of the LAW of God:

"An instructor of the foolish, a teacher of babes, which hast the form of knowledge and of the truth in the law." (Romans 2:20 KJV)

The Sevens of God can also be observed in the things of Nature. It appears that the physics and chemistry of nature are structured on such a seven-base system. An example that almost everyone can relate to is Music. All the songs you hear on the radio are based on a musical system of just seven major notes:

Notice that the seven notes repeat, with the eighth key a higher octave of the first as you go up or down the keyboard. All other minor notes, sharps and flats, fit within the structure and harmony only seven musical notes.

If you pass sunlight through a prism, it produces seven colors - the three primary colors and four secondary ones:

In the realm of Minerals and Geochemistry, there are seven crystal systems:

Even the Periodic Table of the known Elements appears to have seven levels of periodicity: 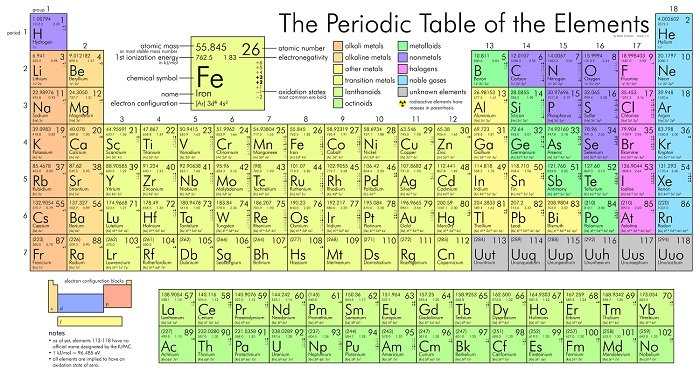 So from just these examples we can see that God has ordained a pattern of sevens in Nature. All things of nature, be they matter, energy, time or space, were designed and ordained by the Lord God. Therefore, rest assured that our Holy Bible is the infallible Master Textbook of true science: Scientists can only elaborate on the observations in excruciating and meticulous specialized details.

"For by him were all things created, that are in heaven, and that are in earth, visible and invisible, whether [they be] thrones, or dominions, or principalities, or powers: all things were created by him, and for him: And he is before all things, and by him all things consist." (Colossians 1:16-17 KJV)

The Lost Rivers of the Garden of Eden