Sediments, Fossils, and Noah's Flood. NOT!

Proponents of "Creation Science", who hold to the belief that the planet Earth is only about 6,000 years old, preach that the vast sedimentary deposits of the Earth's crust were deposited during Noah's flood and that all the fossils found within that strata are the result of creatures that died during that flood. The Scriptures, the Earth's geology, and a little reasoning and common sense expose the fallacy of that false belief system.

The Bible says that the Earth's mountains are very, very old:

When Noah's flood occurred, the Scriptures say the waters of the flood covered the tops of the mountains, so the present-day mountains already existed:

Geologic Fact: Portions of most of the Earth's mountain ranges are composed of sedimentary strata or metamorphosed sediments which contain fossils (the evidence of living creatures long since dead and buried). Three examples are the Appalachian mountain range of the eastern United States (one of the older ones), the Alps of Europe, and the Himalayas of Asia (one of the younger ones). The sedimentary layers that were uplifted to form these great mountain ranges are many thousands of feet thick in places and well above sea level today. In many places, especially in the older Appalachian range, angular unconformities abound, showing where ancient sediments have been tilted and partially eroded, with newer more horizontal sediments being deposited atop the tilted erosion contact surface.

Diagram illustrating cross-cutting relations in geology. These relations can be used to give structures a relative age.

If these mountains existed before Noah's flood (which the Bible says they did), and these mountains were formed from uplifted sediments containing fossils (go climb a mountain and see them with your own eyes), then the creatures that these fossils came from all died sometime long BEFORE the great flood.

In the Appalachian mountain range, you can drive down Interstate highway I-64 from the West Virginia/Kentucky border eastward into Virginia and see deep road cuts exposing repeating sequences of coal, sandstone, siltstone, shale, coal again, shale, etc. The presence of neat, multiple seams of coal in the sequence indicates periods of time when the surface of the land was above sea level, allowing vegetation to flourish, die, and accumulate. 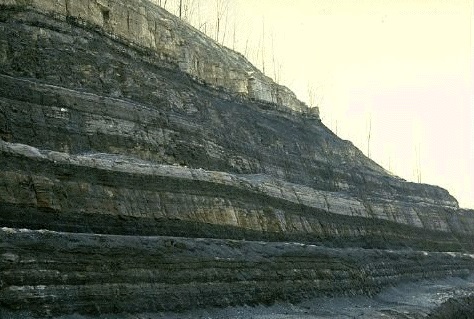 The sequences of sandstone, shale, siltstone and the like indicate submerged or delta associated deposits. Because it takes vegetation time to grow, die and accumulate, you can be sure that these kinds of alternating coal/rock sequences, which contain coal seams ranging from inches to several feet thick, required many, many years to form. (Coal is formed from the remains of trees and ferns.)

According to the Bible, Noah's flood only lasted one year; therefore, it is impossible for these strata to have been formed by a single global flood event. These formations are orderly and well differentiated, which is uncharacteristic of deposits left by rapid flooding and deposition. In many locations these sequences, which originally formed in a horizontal position, are now tilted at various angles; some are now vertical and others have been found to be turned upside down. The tectonic processes to accomplish this require millions of years. You can be sure it occurred long before Noah's days, not during a one-year flood.

Further, if you take the time and effort to calculate the amount of carbon in the coal that has already been mined on the Earth, and couple it with known deposits that have yet to be mined, there is no possible way that the amount of vegetation required to make that much coal could have been growing on the face of the Earth during any single year.

It takes great pressures and long periods of time for sediments to compact and cement into very hard rock. There was insufficient time in a one-year flood period to produce the massive sedimentary deposits of the Appalachians, to say nothing about the differentiation of all the sedimentary layers. And here is another show-stopper: Whatever materials and debris may have been left on the land after the waters of Noah's flood receded would have been quickly eroded away by rains in a few brief years following the flood. THAT is why there is no remaining widespread physical surface evidence of a world-wide flood today. And if the "fountains" of Noah's flood were mid-oceanic geysers on a massive scale, there would have been very little sediment load in the flood waters outside of what was washed down from the mountains of the land areas during the 40 days and nights of torrential rains.

Petroleum (oil) is a complex mixture of hydrocarbons which occurs in many places in the upper strata (sedimentary rock layers) of the Earth's crust. In some instances petroleum seeps to the surface. The La Brea Tar Pits of southern California are an excellent example of such an occurrence. If the sedimentary rocks which contain the petroleum were formed by Noah's flood, where did Noah get the bitumen he used to seal the joints of the Ark to make it waterproof, BEFORE the flood?

"Make thee an ark of gopher wood; rooms shalt thou make in the ark, and shalt pitch it within and without with pitch." (Genesis 6:14 KJV)

The English word "pitch" is from the Hebrew word "kopher" which is bitumen, an asphalt-like form of petroleum.

Speaking of the formation of hydrocarbons like petroleum and coal, here is another fact that the proponents of "Creation Science" overlook: That is the sheer volume of hydrocarbon supply and use on the Earth. If you just add up the amount of 'fossil-fuels' consumed since the year 1751 A.D. (which was roughly the start of the Industrial Revolution). The amount of biological mass required to produce that which has already been consumed would require 13,300 years of accumulated growth on the surface of the Earth. (Source: Discover Magazine April 2004, page 11, "What's in a Gallon of Gas?" ) And the Earth is only about 6,000 years old, Einstein?

Conclusion: When you honestly think through all these considerations, it becomes quite clear that the fossils of the Earth's sedimentary rock layers have been there a long, long time. Those creatures were dead and buried, and the strata was already present on the planet when we find the Earth void and without form at Genesis 1:2. No other interpretation meets all the criteria of truth. Are we saying that Noah's global flood did not happen? No! Noah's flood happened exactly as the Bible says it did. What we are saying is that the Earth's sedimentary rocks were not made by Noah's flood and are NOT the evidence of Noah's flood. The real indirect evidence for Noah's flood is discussed in the next chapter.